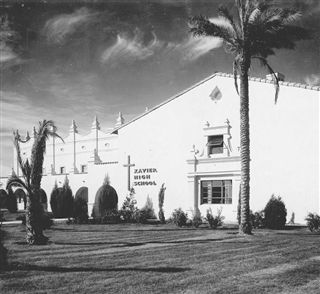 Staffed by the Sisters of Charity of the Blessed Virgin Mary, Xavier College Preparatory is a Roman Catholic college preparatory high school for young women located in the heart of central Phoenix. Xavier is a Catholic community whose mission is to prepare young women of faith with knowledge, skills, and integrity to meet the challenges of a changing global society in a positive and productive manner.

When Xavier High School graduated its first class in 1947, eleven mature and confident young women left footprints of excellence for future generations of students to follow. From its founding in 1943, Xavier College Preparatory continues this tradition of excellence through its teaching of Catholic faith and values, innovative academic curriculum, superior athletic programs and diverse extracurricular and service opportunities.

Founded by the Jesuit fathers of St. Francis Xavier Parish, Xavier High School was initially located on the second floor of Loyola Hall at Brophy, which had closed during the Great Depression due to financial hardship. Xavier remained on Brophy’s campus until the spring of 1953, sharing Brophy’s facilities for one year when Brophy ultimately reopened in 1952. In 1953, Xavier’s 11 faculty members and 174 students moved to our current location, where the original 28-classroom Fitzgerald Hall building and six blacktop tennis courts had just been completed. Since then, the Xavier campus has added Lutfy Hall (1973), the Activity Center (1981), Brown Hall (1983), the Virginia Piper Center for Science and Technology (1994), the Virginia G. Piper Performing Arts Center, Vestar Hall and Steele Educational Complex (2003). In 2008 the Legacy of Leadership Capital Campaign led to the construction of the Chapel of Our Lady, Founders Hall, Petznick Field, McGroder Fieldhouse and expansion and renovation of the Activity Center.

Xavier has consistently been recognized as an academic leader in Arizona. In 1991, 1996, and 2013, Xavier was recognized as a U.S. Department of Education Blue Ribbon School of Excellence, the first high school in Arizona to receive the Blue Ribbon distinction multiple times. In addition, the U.S. Department of Education awarded Xavier a Blue Ribbon for Excellence in Technology in 1996. Xavier was named one of the Top 25 in America in 2005, 2006, and 2007 by the Catholic High School Honor Roll. In the 2007-08 school year, the Siemens Foundation and College Board ranked Xavier as the top high school in Arizona and in the top 50 high schools in the U.S. for Advanced Placement success. Xavier received the National Catholic Education Association Award for Innovation in Education for its course: Financial Literacy: A Call to Stewardship.

Xavier has been blessed with the tremendous support of its loving community that includes 1200 students, their parents, nearly 9,000 alumnae throughout the world, alumnae parents, Xavier faculty, the Advisory Board, the Board of Trustees, the Xavier Foundation, Inc. Board, the Mothers’ Guild and the Dads’ Club. Especially integral to Xavier is our past principal and current president Sister Joan Fitzgerald, BVM who has led the school with her continuity and leadership since 1974 and current principal Sr. Joan Nuckols, BVM, previously served as teacher, department chair, campus minister, and Vice-Principal for Academics.

Christian Service is a key component to Xavier’s Catholic faith community.  This program was the first and now is one of the largest youth service programs in Arizona.

Each day, it is the goal of the Xavier faculty and administration to develop generations of students into young women of faith who pursue excellence. 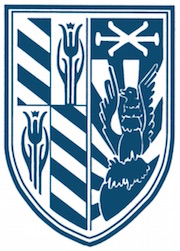 The Xavier shield stands today as an iconic representation of the things that make our school so unique and special. The bars and lilies dominante the left side of the shield. These are symbols of the religious orders that are at our foundation. The lilies for the Sisters of Charity of the Blessed Virgin Mary and the bars for the Jesuit Order. On the right, the letters X and H cross over each other in recognition of Xavier’s original name, Xavier High School. Xavier was given College Preparatory status in 1982 and thus became Xavier College Preparatory. Featured below the initials is the Phoenix in a nod to our home here in Phoenix, Arizona. The bird is seen rising up above brilliant rays of sunshine as the symbol of enlightenment of knowledge dedicated to the Christian Principles held here and as expressed in the diocesan motto, “Omnia pro Jesu” or “All for Jesus.” Lastly, the two solid lines encircling the shield represents the unity and community that stand strong here at Xavier.

Echoes of the French Revolution still resounded; recognition of the independence of the American colonies was a hope inspiring memory; and to the Irish—after a long and persistent struggle—some relief had come. Previously despoiled of their property and reviled as paupers, disabled from teaching or being taught, they were held up to scorn as being illiterates. Five young Irish women gathered together to help change the scene by teaching poor young children in Dublin. In order to finance this endeavor, each had full time jobs, uncommon employment for women of this day. Mary Frances Clarke, a bookkeeper; Margaret Mann, the sole proprietor of a millinery establishment which gave employment to 20 young girls; Catherine Byrne, banker; Eliza Kelly, a child of wealthy parents used her fortune for the destitute, and Rose O’Toole was a family caregiver.

At the time of our Dublin school on North Anne Street there was located directly across the street a convent established by the Institute of the Blessed Virgin Mary, the community which ministers at Saints Simon and Jude and St. Gregory’s. At the same time in this convent, Catherine McCauley, foundress of the Sisters of Mercy, was discerning her life and ministry to the church. This was a time of huge Irish migration to the United States and these five women accepted the request of a Philadelphia priest to found a school for the Irish immigrants in Philadelphia. Leaving Dublin on July 15, they arrived in New York on September 1st. Before leaving home, they had united their fortunes and their little store of gold coins had been entrusted to the keeping of Eliza Kelly. Just as she was disembarking down the swinging ladder of the sailing ship into a waiting dingy, her purse became unlatched and the women watched as all their money fell into the sea.

The second trial to face them in New York was the priest who had been so urgent in his invitation to Philadelphia did not appear. A young priest who was also on the voyage, witnessed their dismay and provided sufficient funds for their journey to Philadelphia. This young man became president of Georgetown University, thus beginning our long time association with the Jesuits, the priests who teach at Brophy. Meager housing and work was found in Philadelphia and their ministry began at St. Joseph’s Church in Willing’s Alley. A young priest named Terence J. Donaghoe became their advisor and assistant. Father Donaghoe while discerning to become a Jesuit was told “no” but that the future “the west would resound with praises of the children of Mary” referring to the work of the new religious community of sisters begun in 1833.